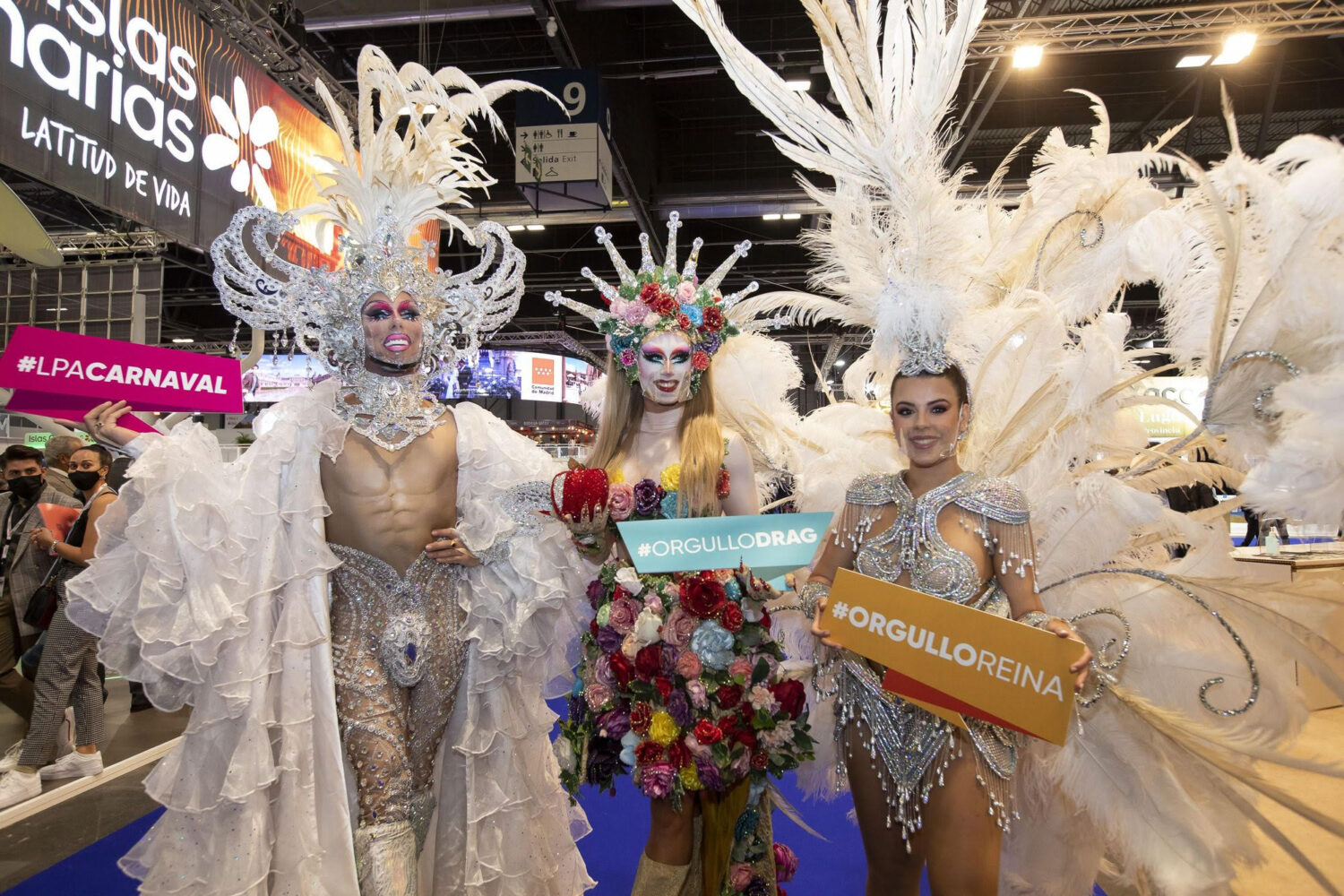 The study commissioned by the City Town Hall for the University of Las Palmas de Gran Canaria confirms that the carnival boosts the economy, improves the image and positioning of the city’s tourism brand and is an outstanding element in providing the feeling of belonging to the community

The residents assure that the ‘carnival is part of our lifestyle’ and give the well-being and happiness that the party transmits a 7.9 out of 10 rating.

The Carnival of Las Palmas de Gran Canaria generates an economic impact for the city of more than 39,000,000 euros, according to the study the City Town Hall of the capital commissioned to the University of Las Palmas de Gran Canaria. The report points out that the event, a Festival of National Tourist Interest, stimulates the economy, generates economic impact, improves the image, promotion and positioning of the city’s tourism brand and is an outstanding element in providing the feeling of belonging to the community.

The results of the study were presented on Monday, May 17, at the headquarters of the Rectorate of the University, with the presence of the Rector Lluis Serra Majem, the councillors of Tourism and Carnival, Pedro Quevedo and Inmaculada Medina, the vice-rector of Culture, Sports and Social Activation of the Campuses, José Luis Trenzado and the director of the study, Doctors and professors, Sergio Moreno.

The data is conclusive about the economic impact of the festivities and their ability to seduce residents, who state that ‘the carnival is part of our lifestyle’, giving a score of 7.9 out of 10 to the wellbeing and happiness that the celebrations provide. In addition, 37% of tourists in Gran Canaria claim to have already known about the carnival in the capital.

The research work has been directed by a Doctor Sergio Moreno, from the University Institute of Tourism and Sustainable Economic Development – TIDES, recognised as a leading world centre in tourism research, and has had the participation of two world experts in Tourism, doctors Tommy Andersson (University of Gothenburg) and Donald Getz (University of Galgary – Canada).

The Councillor for Tourism, Pedro Quevedo, pointed out that “having indicators that measure the footprint of the festival, declared to be of National Tourist Interest, is a strategic and necessary matter. By monitoring the activity and having objective data we can improve and continue working on the carnival as a tourist phenomenon”.

As far as tourist spending is concerned, visitors spend some 1,233,186 euros. Tourists staying in the capital spend 993,186 euros, with an average expenditure per person of 773.51 euros on accommodation and food. Tourists staying in the capital spent an average of 187.51 euros per person at the carnival. The economic impact on image, press, Internet and TV is 16,736,312 euros.

Data that is positively valued when it comes to the investment made throughout the year, an amount that adds up to just over three million euros between public and private contributions.

The analysis of the results shows that the event generates an important social, identity and wellbeing impact for the local community. In this sense, the citizens and residents of Gran Canaria give a rating 4.3 out of 5, as the positive impression of the festivities and 4.29, that the carnival is part of our lifestyle. Another noteworthy fact is the perception of safety during the carnival, which is valued at 3.81 out of 5.

The data leaves no room for doubt: 90% of the island’s residents have at some time participated in the official carnival acts and of these, 37% have been attending them for more than 15 years. Regarding attendance at the most popular events, 50% state that the preferred event is the main Carnival Parade, followed by other major events such as the Drag Queen Gala, Carnival nights and the Daytime Carnival.

The importance of the Carnival as a tourist phenomenon is supported by the impact of the international promotion and the potential of the data that has been collected in the study, such as the level of satisfaction or the intention to repeat the visit, 51% state that they would return. Along these lines, the councillor Inmaculada Medina confirmed the importance of committing to international promotion, “it is well known that one of the fundamental points of the effort made to date has been aimed at obtaining the Declaration of Festival of International Tourist Interest” he pointed out.

The attention to international media, the prominence of figures such as drag queens or the musical stars of the galas, the creation of up to four multilingual versions of the website lpacarnaval.com (English, German, French or Italian) and the impulse that has been given to the international profiles on social media, the actions in Madrid Pride, Fitur or the campaigns in international media in communication hubs such as Madrid, London or Berlin are some of the examples that the councillor mentioned in this regard.

Likewise, the study indicates that 37% of tourists were aware of the Carnival before their visit and 12.26% travelled to the city to participate in it. As far as their level of satisfaction of the experience, those staying in Las Palmas de Gran Canaria rated 8.62 for the level of happiness and wellbeing transmitted by the event and those staying in the south of Gran Canaria rated 7.83.

The technical proposal of the project values as premises the tourist growth that Las Palmas de Gran Canaria has achieved, the improvement of its tourist products, its promotion and the scope of the Carnival as one of its reference events with the challenge of “advancing in the role of the Carnival as a tourist platform that generates greater wealth, employment and international positioning”, explained the director of the study, Sergio Moreno.

Therefore, the objectives of this research work have focused not only on measuring the economic impact of the Carnival with its social implications and tourism spending and participation; but also in establishing a data collection methodology that contributes to the continuous improvement of the event and to convert the festival into an event with greater projection.

The researcher collected data in order to analyse resident and tourist spending through surveys of a thousand people; they included more than 77 parameters. In addition, the reputation in social networks and the average economic return, in addition to public spending, have been used for the study. The study has included direct surveys of tourists staying in the capital and tourists staying in the south of Gran Canaria during the celebration of the Carnival, in order to record the degree of awareness they have of the festival and their involvement in it. The final results have taken into account the interviews and meetings carried out since 2018 with groups and direct participants in the Carnival contests, tourism entrepreneurs, event producers and those responsible for municipal services.

We use our own and third-party cookies for analytical purposes and to show you personalized advertising based on a profile made from your browsing habits (for example, pages visited).

Basic information about cookies
Welcome to the basic information about cookies on the website that is the responsibility of the entity: EMOTUR Project of the University of Las Palmas de Gran Canaria. A cookie or computer cookie is a small information file that is saved on your computer, "smartphone" or tablet each time you visit our website. Some cookies are ours and others belong to external companies that provide services for our website. Cookies can be of various types: technical cookies are necessary for our website to function, they do not require your authorization and they are the only ones that we have activated by default. The rest of the cookies are used to improve our page, to personalize it based on your preferences, or to be able to show you advertising tailored to your searches, tastes and personal interests. You can accept all these cookies by pressing the ACCEPT ALL button or configure them from the "Configure Cookies" section. If you want more information, consult the COOKIES POLICY of our website.
NECESSARY TECHNICAL COOKIES

Technical cookies are strictly necessary for our website to work and for you to navigate through it. This type of cookies are those that, for example, allow us to identify you, give you access to certain restricted parts of the page if necessary, or remember different options or services already selected by you, such as your privacy preferences. Therefore, they are activated by default, and your authorization is not necessary in this regard. Through the configuration of your browser, you can block or warn of the presence of this type of cookies, although such blocking will affect the correct functioning of the different functionalities of our website.

If you disable this cookie, we will not be able to save your preferences. This means that every time you visit this website you will need to enable or disable cookies again.

For the continuous improvement of our website. You can activate or deactivate them. Analysis cookies allow us to study the navigation of users of our website in general (for example, which sections of the page are the most visited, which services are used the most and if they work correctly, etc.). From the statistical information on browsing our website, we can improve both the operation of the page and the different services it offers. Therefore, these cookies do not have an advertising purpose, but only serve to make our website work better, adapting to our users in general. By activating them you will contribute to this continuous improvement. You can activate or deactivate these cookies by checking the corresponding box, being deactivated by default.

Please enable Strictly Necessary Cookies first so that we can save your preferences!